FM Conway’s end-to-end capability in asphalt delivery proved itself during the recent resurfacing of a key section of the M2 motorway in Kent. 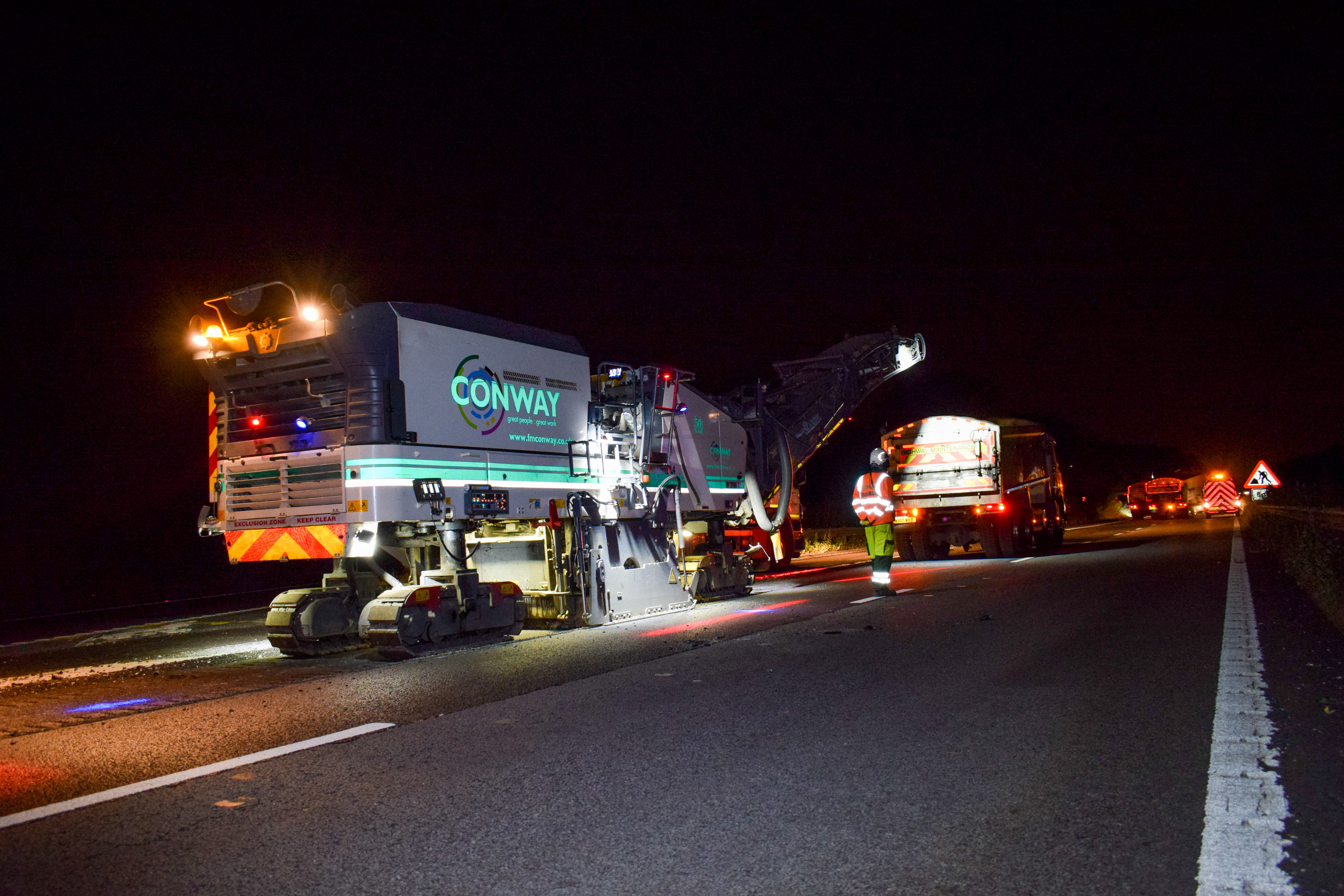 What we achieved in 22 hours would probably have taken five nights of individual overnight closures. A full weekend closure definitely gives efficiencies from an operational point of view.

The company was brought in by Highways England’s asset support contractor A-one+ to resurface both carriageways of the M2 between junctions 5 and 6 near Sittingbourne. Work on the coastbound carriageway was carried out during four night-time closures; the London-bound work was done during a full weekend closure of the motorway between 12th and 15th July.

The work involved planing out the existing surfacing material to a depth of 50mm and replacing it with a new 50mm asphalt surface course. In addition, some sections were planed to a depth of 100mm, and replaced with 50mm of new binder course, as well as the thin surfacing.

FM Conway not only carried out all the planing and surfacing with its own equipment and operatives, but also supplied all the material from its asphalt plant in Erith, and delivered it using the company’s own haulage fleet. The same trucks also took the recovered planings to an FM Conway aggregate depot for recycling. A total of 53 lorries were used to get materials in and out of the site.

Nick Burman, Business Development Director at FM Conway, said: “The trucks were on a continuous loop – either coming back to the site for planings or going to the asphalt plant to pick up material to bring back to the site. It was a very efficient way of working.”

Work on the London-bound carriageway was done while the motorway was closed for an entire weekend to enable A-One+ to carry out other essential maintenance and improvement work. The closure enabled FM Conway to maximise productivity throughout every aspect of the job, including using two planing machines in echelon to plane off the old surfacing.

Paul Padfield, Surfacing Director at FM Conway, said: “What we achieved in 22 hours would probably have taken five nights of individual overnight closures. A full weekend closure definitely gives efficiencies from an operational point of view.”

He added: “Continual working also means there are fewer day joints, resulting in better ride quality, and there are environmental benefits as a result of more efficient use of resources and reduced material wastage. You are also minimising hazardous activities – such as the installation and removal of traffic management – by a factor of five.”

Sean Coleman, Area 4 construction manager at A-one+ described FM Conway’s work as “seamless delivery” and said this is “what we all strive for”. He added: “Considering we gave you a short window to resource these works only adds to the achievement and reflects what your company is all about.”