Leading infrastructure services company FM Conway and Transport for London (TfL) have set a new benchmark for recycling in the highways industry with a landmark project on the A40. 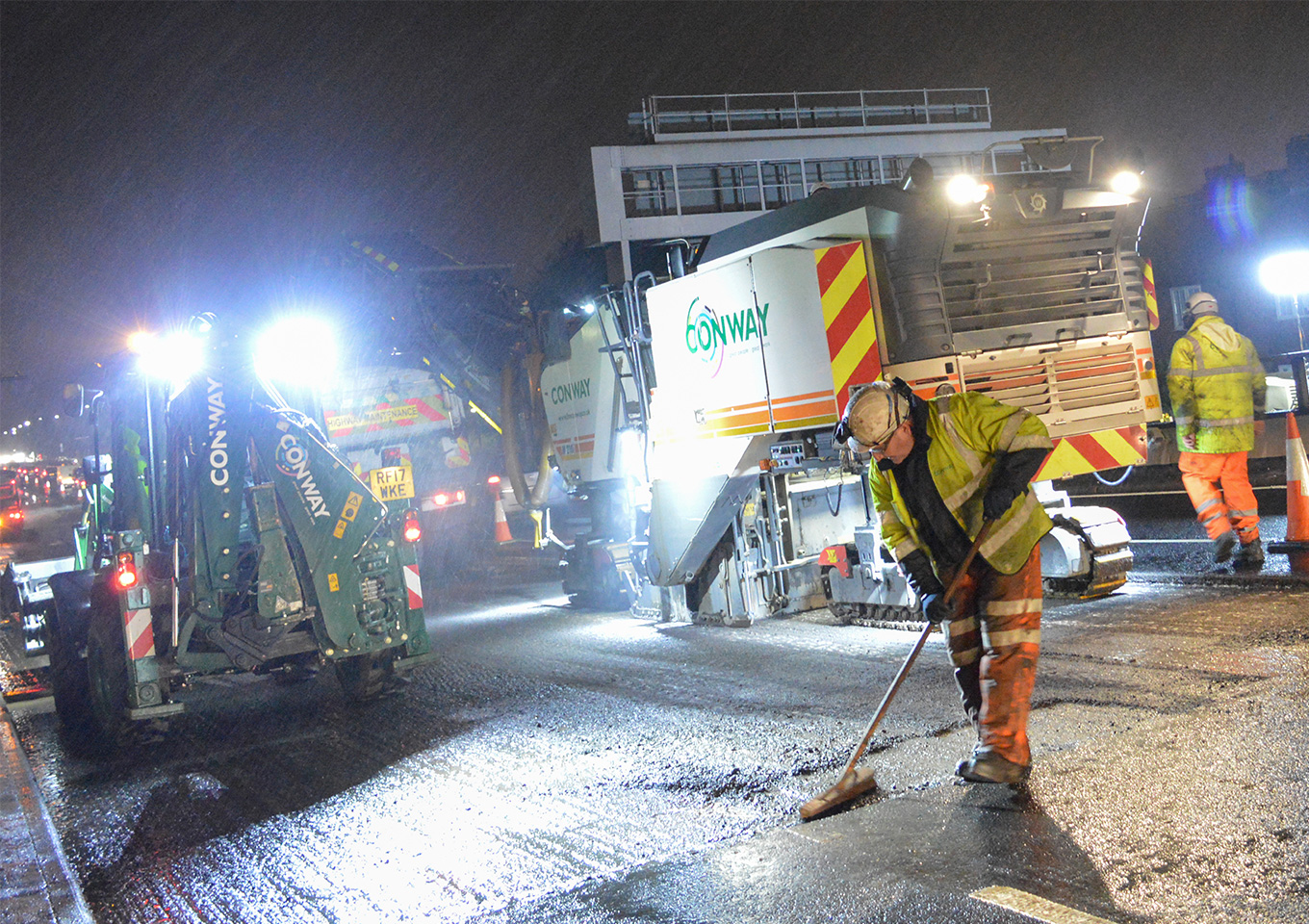 FM Conway has laid an asphalt surface course containing 50 per cent high PSV recycled aggregate, resurfacing over 20,000 metres on the A40 in west London. The project marks a pivotal shift in the way that roads are built and maintained in the UK. It is the first time that a surface course mix – used for the top layer of a road – containing such a high proportion of recycled material has been laid on a strategic route outside trial conditions.

Until now, standard practice has been to limit the recycled content of surface courses for motorways and A-roads to around 10 per cent. The A40 project follows a successful trial carried out by FM Conway and TfL in 2016 to lay a high-recycled asphalt mix on the A1.

As well as supporting sustainable use of materials, the A40 works saw FM Conway introduce an innovative laying technique to speed up delivery and cut costs for TfL. In contrast to traditional methods, which see surfacing materials laid in two layers at a depth of 100mm, the new material was laid in one go at a depth of 70mm, expediting the resurfacing process and allowing road users to get back on the A40 more quickly.

The material incorporates FM Conway’s own designed and manufactured Polymer Modified Bitumen (PMB). The addition of PMB to an asphalt mix can significantly improve the durability of highways assets by improving their resistance to rutting and cracking.

As well as supporting sustainable use of materials, the A40 works saw FM Conway introduce an innovative laying technique to speed up delivery and cut costs for TfL.

Tim Metcalf, Aggregates and Asphalt director at FM Conway, commented on the importance of the project: “Our trial with TfL last year proved that high-recycled surface course materials are both able to perform and environmentally sustainable. The project on the A40 takes this work to the next level, using insights from the trial to make recycling standard practice on the strategic network.

“Using the roads as our quarry cuts costs, reduces carbon footprint and transport movements. It’s a resource and time-efficient approach and we’ll be working with customers and partners to help embed it across the industry, minimising the environmental impact of highways projects and ensuring road users can get back on the network in the shortest time possible.”

TfL’s Highways Technical Manager, Herbert Micallef, said that making asphalt recycling standard practice would bring benefits for the public and highways operators: “Asphalt recycling does happen but so far the highways sector has been slow to accept it as best practice for work on both the strategic and local networks. FM Conway and TfL are changing this, bringing benefits for both road users and network operators. “Aggregate and bitumen are finite resources. We need to look to more sustainable alternatives if we’re going to continue providing a high-quality surface network for London’s road users now and in the future. Increasing the uptake of recycling and investing in advanced materials is a smarter, costeffective way of doing this, helping us to unlock historic investment in London’s roads by recovering asphalt for reuse.”